« back to all blogs

How I Was Invited to PechaKucha Night Chicago

Pam Parker had told my husband, Ben Hollis, "You've got to see this, you'll love it, join me." And so we did. I admit to some reluctance on my part to join in but when I arrived I was immediately a convert. Live social networking that is entertaining and above all about celebrating being creative and investigating the many ways that we as humans interact with our world. Every three months 10 to 12 people are given the opportunity to share a little piece of their world with about 250 other people. The process of Life is the main theme here. Be it internal or as a project that covers so many square feet of Earth, PechaKucha stirs up life in a unique way that directs our thinking to new places. Hooray.

On the first night, December 3, 2008 we entered Martyr's early. The show was to start at 8:00 pm but Pam said get there early for a seat. As the first presentation began the large screen on the stage filled with colors and a voice began to speak with passion for what they were sharing. Ah Life! One woman spoke of how to have a good marriage, another man spoke of his work and an artist presented the relationship of the shape of Lake Michigan to a certain male appendage and another person spoke of their work with The Southshore Cultural Center.

Pam introduced Ben and I to Peter and we had a short and raucous exchange before the show began. Now we flash to two months later in February. Peter and I meet for lunch and talk about the creative process, his zoo project and my love of nature. It was an enjoyable networking lunch and then we each went back to our work lives.

March 3rd, 2009, PechaKucha Night shows again with a new crew of people. Again the evening is divine in its diversity. We all laughed and cried and enjoyed meeting new people. Horizons were expanded. Peter said hello and mentioned that I had signed up to do a presentation at the first event I had visited and was I still interested. Sure I said. On June 2nd, 2009 at 8:00pm at Martyrs', 3855 N Lincoln Avenue in Chicago the deed was done. It was a great feeling to share form the heart what has become a driving force of why I love the work I do. Creating a new aesthetic for the everyday gardens of city dwellers is my mission. 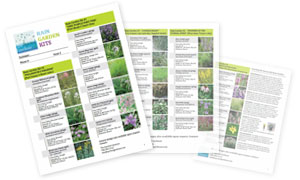 Not sure which plants will work for your particular combination of sun exposure and soil/moisture conditions? We've taken the guesswork out of the equation and put together creative plant combinations that are sure to beautify your yard. Sign up to receive quarterly updates on what we are doing to support the "Greening" of the world around us. Subscribe now! You can unsubscribe at any time.